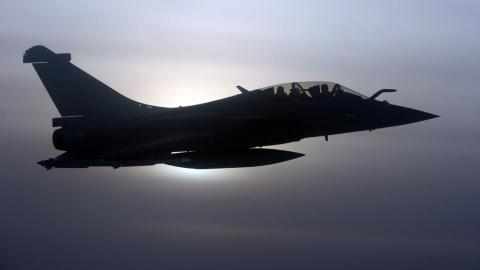 A file photo shows a French Rafale fighter jet during a drill over France on January 14, 2020 as part of NATO exercises to deter Russian planes from entering allied airspace. (Reuters/Johanna Geron)

France has agreed to sell 30 Rafale fighter jets to Egypt in a 3.75 billion euro ($4.5 billion) deal which could be sealed as soon as Tuesday, the Disclose investigative website reported, citing confidential documents.

“Very advanced discussions have indeed taken place with Egypt and announcements could be made very soon,” a French governmental source told Reuters in response to the Disclose report on Monday, while declining to give further details.

Disclose said the agreement between France and Egypt also covers contracts from missile provider MBDA and equipment provider Safran Electronics & Defense which are worth another 200 million euros.

The website said a deal could be sealed on Tuesday when an Egyptian delegation arrives in Paris.

France was the main weapons supplier to Egypt between 2013-2017. Those contracts dried up,...read more...