Memory of the day: Agrarian Reform Law promulgated in Egypt in 1953 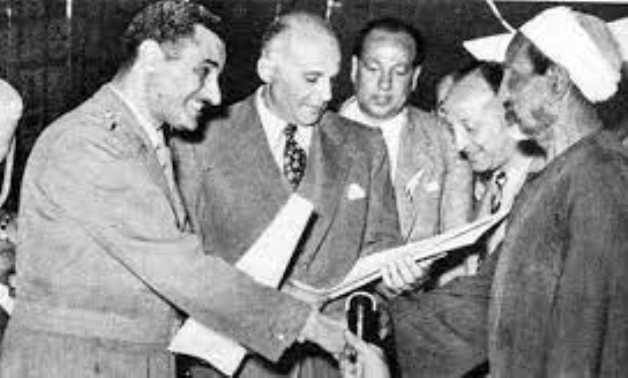 Memory of the day: Agrarian Reform Law promulgated in Egypt in 1953

CAIRO – 9 September 2021: On September 9, many important events took place. 337 - The three emperors, Constantine II, Constantius II, and Constantius succeed their late father, Constantine I, on the throne of the Roman Empire as co-rulers of the empire. 914 - The leader Zaka Al-Awar enters Egypt at the head of an army sent by the Abbasid Caliph to ward off the Fatimid danger from Egypt, as they aspired to control it after the Maghreb countries. 1827 - The Egyptian fleet led by Ibrahim Pasha arrives at the port of Navarine in Greece. 1876 - The first issue of Al-Ahram newspaper is published as a daily newspaper. 1881 - The Urabi Revolution begins in Egypt, led by Ahmed Orabi, who heads in a procession with the leaders of the Egyptian army to Abdeen Palace, the residence of Khedive Tawfiq, to present the nation's demands for good governance. 1882 - The Battle of Tel El-Kebir begins between Ahmed Orabi and the British. 1953 - The Agrarian Reform Law is promulgated in Egypt, and the Peasants' Day is celebrated. 1976 - Palestine joins the Arab League after agreeing to consider the Palestine Liberation Organization as the legitimate representative of