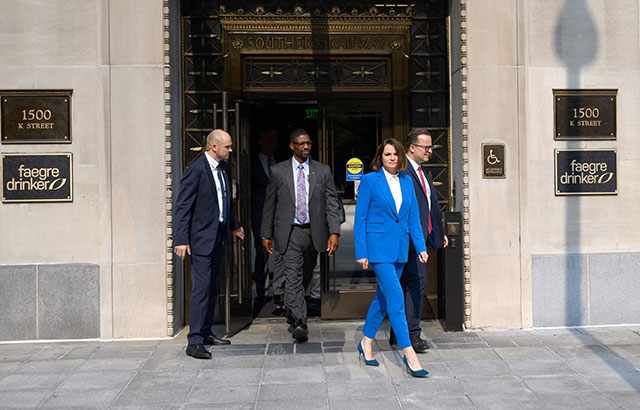 WASHINGTON — The exiled leader of the Belarusian opposition said Tuesday that she asked US leaders for tighter sanctions on businesses, hoping to force them away from veteran strongman Alexander Lukashenko.

Svetlana Tikhanovskaya, who says she easily won last year’s election in which Lukashenko said he secured a sixth term, is on a visit to Washington as President Joe Biden’s administration vows to step up pressure on the pro-Moscow Belarusian leader.

In a meeting Monday with Secretary of State Antony Blinken, Tikhanovskaya said she presented a list of companies on which she hopes the United States can impose further sanctions.

"We understand that only Belarusians themselves can bring the country to democratic changes but we hope for American active and non-symbolic participation," Tikhanovskaya told a roundtable of the State Department Correspondents’ Association.

"President Biden says that the world is struggling between autocracy and democracy. So the frontline of this struggle is in Belarus at the moment. As a champion of democracy, the USA can...read more...