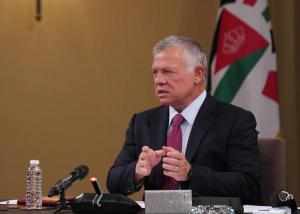 His Majesty King Abdullah on Tuesday reaffirmed that Jordan’s success entails everyone engaging in dialogue to advance national interests, regardless of ideological differences.

During a meeting with political figures at Al Husseiniya Palace, King Abdullah noted that the door is open to all proposals and views regarding the reform process, on the basis of mutual respect and openness, and with the aim of advancing Jordan’s interests.

Stressing that it is the duty of all to maintain public trust in Parliament, His Majesty noted the need to link modernising the political system with public administration reform and economic development, as an integrated process rooted in the rule of law.

The King called for defining the final objective of political reform and formulating a comprehensive plan to reach it, pointing out that the process is not exclusive to a single law.

His Majesty described his discussion papers as a starting point for dialogue on reform.

Related to: Jordan Dialogue Success Everyone