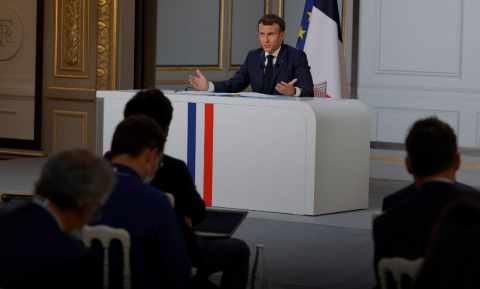 French President Emmanuel Macron speaks during a news conference ahead of the G7 Summit, at the Elysee Palace in Paris, France, June 10, 2021. REUTERS/Pascal Rossignol/Pool

French President Emmanuel Macron said on Thursday he was working with international partners to create a financial mechanism to ensure important public services can continue to work in Lebanon despite its deep political and economic crisis.

Lebanon is struggling to find enough foreign currency to pay for fuel and other basic imports, its finances crushed by a mountain of debt that has piled up since the country’s 1975-1990 civil war.

Macron, who has led international aid efforts to France’s former colony, has been trying to increase pressure on Lebanon’s squabbling politicians to break months of deadlock on forming a new government and launch reforms to unlock foreign cash, Reuters reported.

“We are technically working with several partners in the international community so that at some point, (…) if the absence of government persisted, we could succeed in...read more...

France’s Macron says G7 is not hostile towards China