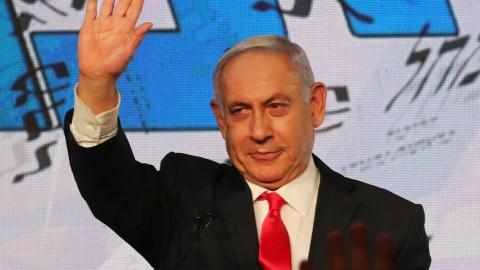 Israeli Prime Minister Benjamin Netanyahu gestures as he delivers a speech to supporters following the announcement of exit polls in Israel’s general election at his Likud party headquarters in Jerusalem on March 24, 2021. (Reuters)

Israel’s Prime Minister Benjamin Netanyahu said Monday he would let his estranged former protege Naftali Bennett serve as premier ahead of him in a coalition to prevent a “left-wing government.”

But Bennett, a right-wing nationalist who emerged as a kingmaker following Israel’s inconclusive March 23 vote, swiftly dampened the notion that a deal with Netanyahu was in the works.

After his Likud party won the most seats in the vote — Israel’s fourth in less than two years — Netanyahu earned a 28-day mandate to form a coalition, according to AFP.

That mandate expires at midnight Tuesday-Wednesday.