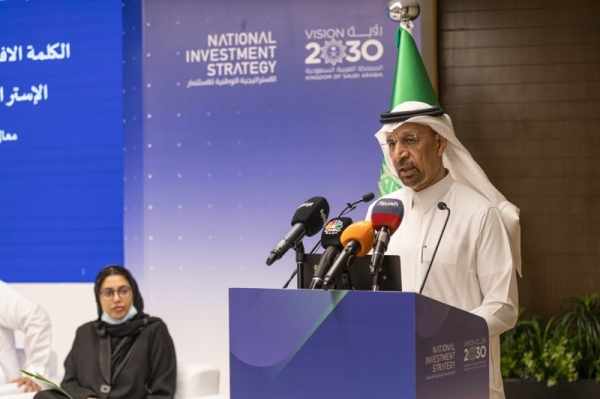 RIYADH - The Minister of Investment Khalid Al-Falih said that Saudi Arabia targets a gross domestic product (GDP) of SR6.4 trillion by 2030. The Kingdom also seeks over SR12 trillion worth of investments in order to emerge as one of the world’s 15 largest economies, the minister said on a meeting to highlight the National Investment Strategy (NIS) on Wedensday. The NIS will help achieve, in collaboration with other government entities, the objectives of the Vision 2030, Al-Falih said. He also indicated that the Kingdom has the strongest financial solvency among the G20 countries. “The Kingdom’s investment performance is below expectations, compared to its ability to attract, absorb and generate investments. In the next phase, we will be achieving the Vision 2030 objectives; we need to boost the Kingdom’s investment performance in qualitative and quantitative terms,” Al-Falih said. “In quantitative terms, we are looking forward that those investments would account for 30% of GDP, toeing the line with the developing economies. Investments at best accounted for 22% of the Saudi GDP,” he added. By 2030, total investments will exceed SR2 trillion per annum, or three times the current level of nearly SR650 billion. This leap requires an integrated work, empowerment