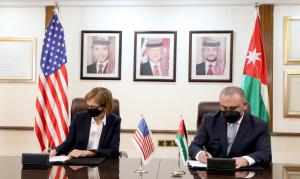 Ammon News – Shraideh: The grant comes in recognition of King’s efforts to strengthen cooperation with U.S

The signing of an agreement to transfer the first disbursement of the US cash transfer grant worth USD 600 million to the Treasury was announced today, ahead of His Majesty King Abdullah II’s official visit to Washington, DC.

The early disbursement will contribute to the financing of priority government programs and support Jordan’s economic recovery.

The agreement was signed by Minister of Planning and International Cooperation Nasser Shraideh, on behalf of Jordan, and by United States Agency for International Development (USAID) Mission Director Sherry F.

This is the first disbursement of the USD 845 million cash grant for 2021, which falls under the U.S. economic assistance program to Jordan for the current year.