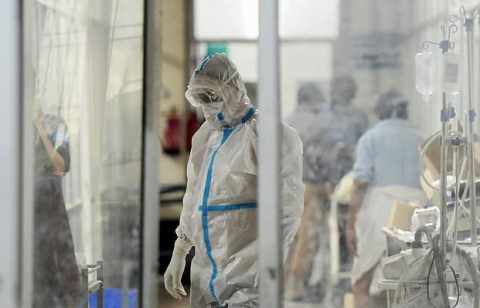 India’s coronavirus caseload topped 20 million on Tuesday as it struggled to contain a huge outbreak, in stark contrast to gradual reopenings in the United States and Europe.

Rapid immunization programs in wealthier nations have helped suppress outbreaks, and the European Union was even looking at allowing vaccinated foreign tourists into the bloc as early as next month.

That was a far cry from the nations still grappling with outbreaks, including India where more than 350,000 new cases were reported Tuesday as a devastating wave of infections overwhelmed hospitals and depleted critical resources such as medical oxygen.

With the government struggling, some young Indian volunteers have set up apps to crowdsource aid and are using social media to direct resources to people in need.

“Some of us do midnight to morning shifts, because the calls don’t stop at 3 am,” said Swadha Prasad, 17, who works long hours updating information, verifying the availability of supplies and fielding calls from frantic relatives seeking help.

Related to: US India Europe Cases