Upstream spending, cut by $285 billion in two years, will struggle to recover to pre-pandemic levels 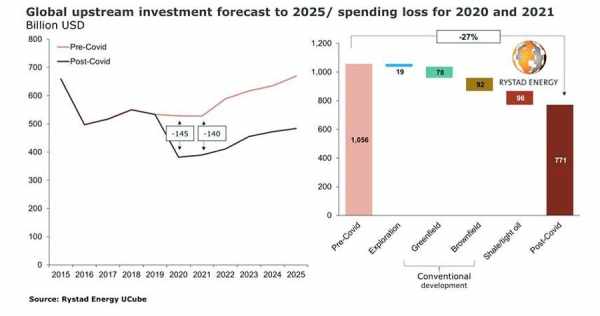 Upstream spending, cut by $285 billion in two years, will struggle to recover to pre-pandemic levels

OSLO â€” The toll of the COVID-19 pandemic on upstream investments in the first two years of the downturn is estimated at a whopping $285 billion, and although spending will slowly start to rise from 2022, it will not reach pre-crisis levels in the coming period, according to a Rystad Energy report. The shale sector has been the most affected, with conventional exploration and investments in mature assets suffering the least thus far. In February 2020, before COVID-19 started impacting the global energy system, Rystad Energy estimated global upstream investments for the year would end up at around $530 billion, almost at the same level as in 2019. Our forecast at the time suggested 2021 investments would remain in line with the previous yearâ€™s level. However, as the COVID-19 pandemic triggered a collapse in oil prices during the early part of the second quarter last year, E&P companies slashed investment budgets to protect cash flow. This spending trend was not reversed in 2021, when prices rose. Compared to pre-pandemic estimates for 2020 and 2021, we observe that spending fell by around $145 billion last year and will end up losing $140 billion by the end of this year. This implies