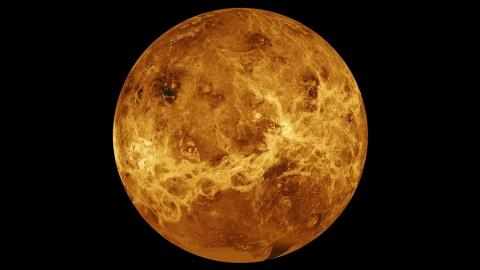 Data from NASA’s Magellan spacecraft and Pioneer Venus Orbiter is used in an undated composite image of the planet Venus. (Handout via Reuters)

Data obtained by bouncing radio waves off Venus – treating it, as one scientist said, like a giant disco ball – is providing new insight into Earth’s closest planetary neighbor, including a precise calculation of the duration of a Venusian day.

The study also measured the tilt of the Venusian axis and size of the planet’s core, allowing for a deeper understanding of an enigmatic world sometimes called Earth’s “evil twin.”

It was already known that Venus has the longest day – the time the planet takes for a single rotation on its axis – of any planet in our solar system, though there were discrepancies among previous estimates.

The study found that a single Venusian rotation takes 243.0226 Earth days. That means a day lasts longer than a year on Venus, which makes a complete orbit around the sun in...read more...