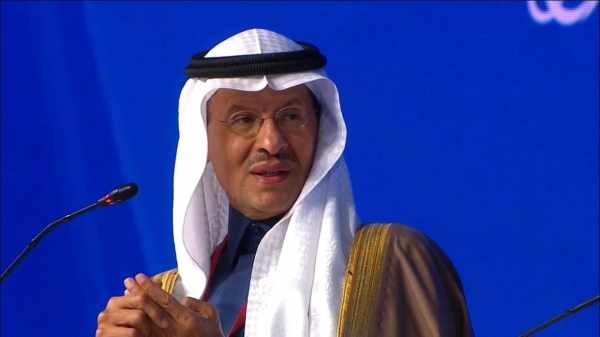 MOSCOW – Minister of Energy Prince Abdulaziz Bin Salman has said Saudi Arabia is becoming an energy country, not just an oil and gas producer. "By 2030, Saudi Arabia will deliver exemplary results in terms of reducing carbon emissions," Prince Abdulaziz told a forum in Moscow on Thursday. The Saudi energy minister dismissed calls for speedier oil output increases, saying OPEC efforts with allies were enough to protect the oil market from the wild price fluctuations witnessed in the natural gas and coal markets. "What we see in the oil market today is an incremental (price) increase of 29%, vis--vis 500% increases in (natural) gas prices, 300% increases in coal prices, 200% increases in NGLs (natural gas liquids) ...," the Saudi energy minister said. "Gas markets, coal markets, other sources of energy need a regulator. This situation is telling us that people need to copy what OPEC+ has done and what it has achieved," he said. "We keep telling people that we should be looking beyond the tip of our noses. If you take 2022 into account, you will end up with a huge amount of stocks by the end of the year," the the minister added. "OPEC+ has contributed