In Pics: Egypt’s Sisi briefed on construction of ‘City of Arts’ in new Alamein 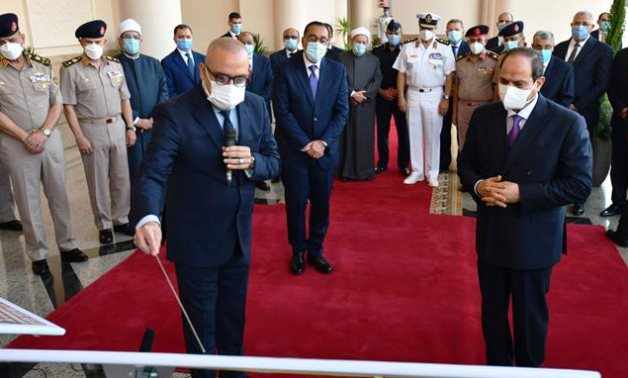 In Pics: Egypt’s Sisi briefed on construction of ‘City of Arts’ in new Alamein

CAIRO – 20 July 2021: After performing the prayer of Eid Al-Adha on Monday morning in the new city of Alamein, President Abdel Fattah El-Sisi made an inspection tour to be briefed on the latest development of constructing Egypt's City of Arts in El Alamein. President Sisi listened to a detailed explanation from Minister of Housing Asem El-Gazzar about the construction rates of the project, said Egyptian Presidency Spokesperson Bassam Radi in a statement. The City of Arts is a cultural outlet for the residents of Mediterranean cities of El Alamein and the Northern Coast on an area of 260 acres, Radi said. The city includes complexes for cinemas, restaurants, an open Roman theater for concerts and musical performances equipped with advanced technologies, and an opera house, in addition to training halls and exhibition halls. It also includes a building for Bedouin hand-made products in a way to preserve the heritage of the city of El Alamein. Moreover, it has a central library and wrship houses. Egypt is building another "City of Arts and Culture" in the New Administrative Capital. The City of Arts would be the largest artistic and cultural city in the Middle East. The city is being