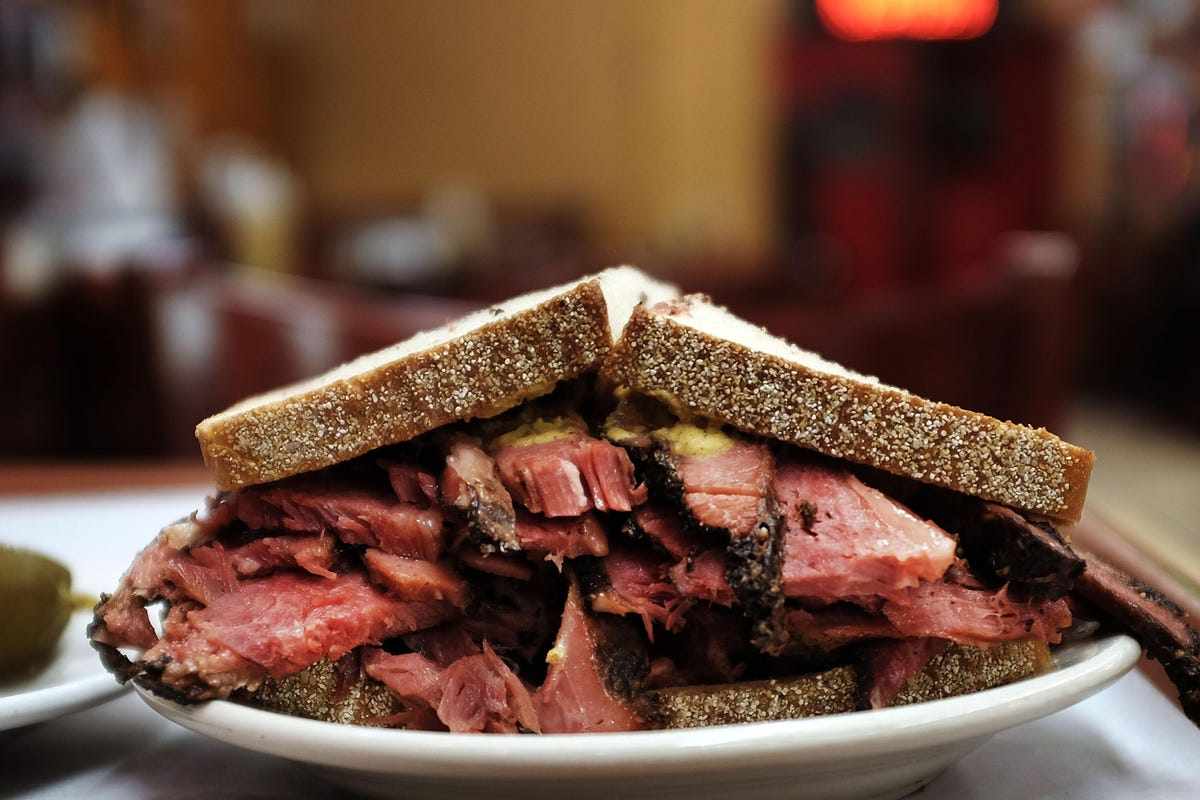 NEW YORK, NY - MARCH 20: A classic pastrami sandwich is viewed at Katz's Delicatessen on March 20, ... [+] 2015 in New York City. A pastrami sandwich at Katz's will now cost $21. 50 with tax due to the rise in the meats price. Beef prices increased 19% in January and are expected to keep climbing. (Photo by Spencer Platt/Getty Images) Just released - the August Consumer Price Index (CPI) indicated an 5. 3% inflationary increase over last year (up . 3%) and the index (less food and fuel) increased 4% (up . 1%). While pundits labeled this "tame" it is hardly a surprise for anyone who goes shopping - as prices do continue to rise, as compared to last year. The report does, however, beg the issue of how the Fed will respond to the money they continue to pump into the economy, and how Congress will react to spending bills that are on the floor. Looking at all the issues combined, one really has to ask: if inflation continues to rise (albeit slowly) - are headed towards a period of "stagflation" like we had in the mid-1970's? It seems that deflation, inflation, (and now "stagnation") have replaced innovation, automation, and globalization as the pundit's retail commentary menu du jour. Our current period has evolved around the word "transitory" - since it became political terminology - likely created by Government officials inclined to live in an environment where we continue to spend more than we have. Inflation has been with us for months (and continues to rise) while the Fed holds their "transitory" line - slowly leaking information about tapering their bond buying frenzy. Retailers, however, live in the real world, ignoring economic predictions and dealing with day-to-day customers who remain averse to increased prices. These retailers are forced to think of clever ways to handle the situation while mastering the art of shrinkflation (making price increases look like a bargain, or holding a price while giving less for more). As fictional (but realistic) examples: *One retailer took a $3 item that sold for $8 (grossing $5) and created a two-for. Their cost rose to $4 - so they now sell two-for $18 (still grossing $5). *One grocer reduced the size of his "bunch" of bananas and started selling them by the pound, figuring that no one knew how many bananas were in a bunch. *Another grocer took a bunch of radishes that contained 14 and reduced it to 12 – holding their price as is, figuring that no one counts a bunch. *One golf pro (at a driving range) sold a $10 bucket of balls that contained 60 and now offers 50 balls for the same price. *And, there is the tee shirt retailer who sold their tee shirt for $25 (cost $10/margin $15) and now sells it for $40 with 20% off (or $32) – realizing a cost of $12 and a margin of $20. Retailers are a hardy lot and know how to survive during inflationary periods. Some even function in spaces where price doesn't matter as much - because demand outstrips supply. Examples: *The New York City Martini went from $16 to $19 this year, and is also available at $24 - if you head to the Hamptons. The bottom line is that inflation and higher prices are here to stay - so everyone needs to get used to it! The bigger economic problem - is that employment is not rising with inflation, and that creates an ugly situation called "stagflation" which could eventually slow down economic growth. In simpler terms, "stagflation" is like a bad weather report. You may know it's coming, and you're not sure what you can do about it! Economists believe that "stagflation" can is activated by a shock to the supply chain, coupled with an incorrect economic policy. Certainly, our current supply chain misery is a potential qualifier for "stagflation." In addition, economic policy issues can be realized by an oversupply of money pumped into our financial system, coupled with excessive artificial tariffs that falsely raise the cost of consumables. The problem with "stagflation" is that it's not an easy problem to cure. If the government goes after inflation, that could work against employment, and if the government goes after unemployment, it could increase inflation. Bottom line, "stagflation" is an economic place you don't want to be, The August CPI report was the latest (less) reasonably bad number to hit the street, and don't forget that the August CCI (Consumer Confidence Index) also fell 11. 3 points to the lowest level since February of this year. Retail employment also fell in August by 29, 000 jobs (at a time when everyone thought it would be growing). In addition, the number of "quits" in the retail trade in July continued to be the second highest category behind leisure and hospitality, which likely means that COVID avoidance ranks high with workers who probably don't want to interface with the public. The bottom line for all this data - is that it may be too soon to call inflation "tame." Keep in mind that in 2003 the famed Las Vegas Magicians Siegfried and Roy thought their 400 pound white Bengal tiger named Manticore was "tame," until he grabbed Roy Horn by the neck and dragged him off the stage, nearly killing him. Follow me on Check out I was Chairman of the Board of the American Apparel & Footwear Association (AAFA) and also served as their President and CEO. The Association represents more than 1, 000 I was Chairman of the Board of the American Apparel & Footwear Association (AAFA) and also served as their President and CEO. The Association represents more than 1, 000 well-known brand names - with a primary mission to interface with government on matters related to our industry. I was also President of several branded and private label fashion companies that allowed for the unique and incredible opportunity to be deeply involved with most aspects of the apparel, footwear, accessory, and retail communities on both a domestic and international level. I participate annually in the Consortium for Operational Excellence in Retailing at Wharton and Harvard and guest lecture at Wharton, Harvard, Columbia, Cornell - as well as provide industry commentary on CNBC, CNN, Yahoo Finance, Bloomberg, BBC, and Fox.