Indian expat spends $55,000 to fly with family on private jet from Kerala to UAE 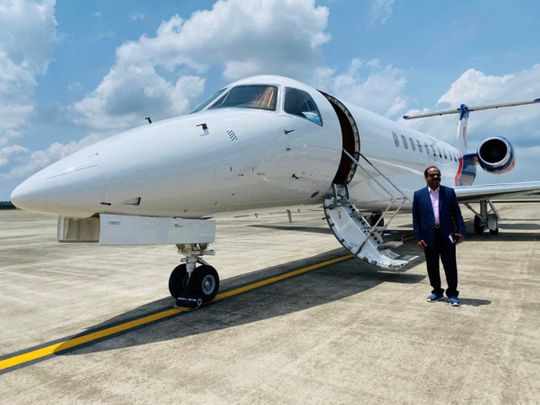 Indian expat spends $55,000 to fly with family on private jet from Kerala to UAE

Dubai: An Indian businessman has spent around $55, 000 (Dh202, 290) to fly with his family, including his newly married daughter and her husband, from India to the UAE on a private jet due to the suspension of commercial passenger flights from India. The 13 passengers, including four employees of P. D. Syamalan, managing director of Sharjah-headquartered Al Ras Group, flew in from Cochin International Airport in Kochi, Kerala, to Al Maktoum International Airport in Dubai on Friday. A UAE resident for more than four decades, Syamalan had flown down to his hometown for the marriage of his daughter, Anju Syam, along with his family members and some employees, on March 15. Anju's wedding with Siva Prasad, a Keralite residing in France, took place on April 25, just hours after the suspension of travel came into effect for passengers from India to the UAE. Though he did not fall in the category of businessmen with the golden residency visa, Syamalan found solace that the UAE government had also announced travel exemption for those on flights chartered by businessmen. UAE citizens, officials of diplomatic missions appointed by the two countries and official delegations are also exempted from flying in from India…