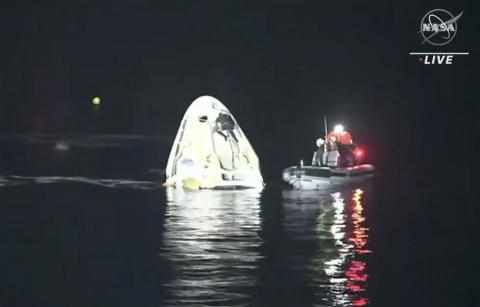 In this image made from NASA TV video, the SpaceX Dragon capsule floats after landing in the Gulf of Mexico near the Florida Panhandle early Sunday, May 2, 2021. (AP)

SpaceX safely returned four astronauts from the International Space Station on Sunday, making the first US crew splashdown in darkness since the Apollo 8 moonshot.

The Dragon capsule parachuted into the Gulf of Mexico off the coast of Panama City, Florida, just before 3 am, ending the second astronaut flight for Elon Musk’s company.

It was an express trip home, lasting just 6 1/2 hours.

The astronauts, three American and one Japanese, flew back in the same capsule – named Resilience – in which they launched from NASA’s Kennedy Space Center in November.

“We welcome you back to planet Earth and thanks for flying SpaceX,” SpaceX’s Mission Control radioed moments after splashdown. “For those of you enrolled in our frequent flyer program, you’ve earned 68 million miles on this voyage.”

Astronauts splash down off Florida on SpaceX craft