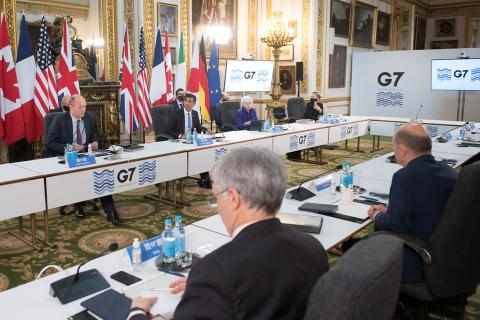 A meeting of finance ministers from across the G7 nations ahead of the G7 leaders’ summit, at Lancaster House in London, Britain June 4, 2021. Stefan Rousseau/PA Wire/Pool via REUTERS

G7 leaders will agree to expand global Covid vaccine manufacturing to provide at least one billion doses to the world through sharing and financing schemes, Britain said Thursday.

The announcement came after the United States said it would donate 500 million jabs to 92 poor and lower-middle-income nations.

The UK, which is hosting the big powers’ gathering in southwest England, added it would donate at least 100 million surplus doses within the next year, including five million beginning in the coming weeks.

The commitments follow growing calls for richer countries to step up their efforts to share Covid-19 shots with less developed nations, with charities warning the current situation is leading to “vaccine apartheid”.

Britain, which has orders for more than 400 million doses, has faced criticism for failing to begin making donations to poorer...read more...